One of the best vacations I had in Asia. We were able to visit a lot of places in Bangkok and I really had fun. Not to mention, one of the major factors that contributed to my enjoyment in Bangkok was their Thai food, arguably one of the best cuisines in world! All you need to do is walk around Bangkok, and you’ll find some great Thai food, either at a roadside stall, a sit-in restaurant, or anywhere within walking distance from the city’s major tourist attractions. But our vacation was different, it was Buffet meal everyday (Breakfast, Lunch and Dinner) which was really exciting ’cause we got to taste different mouth watering Thai foods and I really am a fan of the spicy taste.

Their temples and palaces in the city make for excellent places to learn about Thai culture; the people themselves are relaxed and friendly and always hospital and they also keep on mistakenly thinking that were also Thai people. I guess they were right; Filipinos and Thai totally look the same.

Wat Arun (The Temple of Dawn) Before entering their temple, we decided to stopped by in this mini store on the expansive lawns to have our photo shoot. Dressed up in my thai traditional costume, I don’t think orange looks good on me but I had no choice since all my favorite colors were already worn by my sisters. 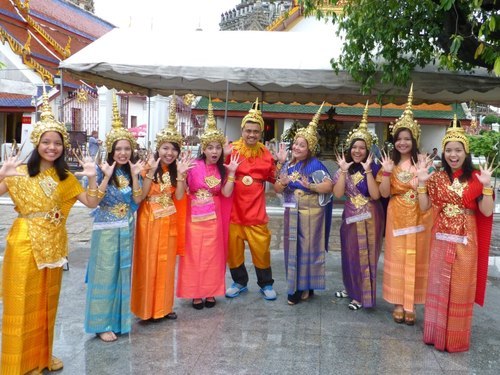 Tadaaa! Our family picture! The Alagar family on Thai costumes. We really look like a bunch of Thai people in this costumes. The Standing Buddha. A soaring 32-metres high standing Buddha is what defines Wat Intharawihan. It is decorated in glass mosaics and 24-carat gold and our tour guide said that it took over 60 years to complete this statue which made it as the tallest of its kind in the world. 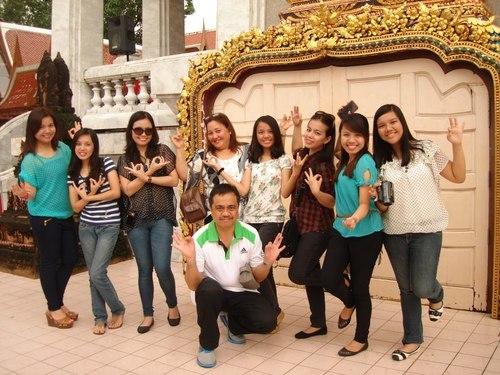 Excited to see the show that I have been waiting for, but first of, smile for the camera guys! Had a very full tummy! Must not missed on the buffet dinner serve before the show. Worth the money with wide variety of food options. Highly recommended for the coconut ice cream, thumbs up! Taking a pose with the cute elephant before waiting for the most spectacular show in Bangkok! Look at that excite face!

After dinner, we proceeded to their theater. Cameras were prohibited so I didn’t have photos of the show. The backdrop and special effect was very beautiful! The actors were very professional, too! You will be transfixed by the stage sets, design and technology. An experience to die for! I want to urge everyone who plans on visiting Bangkok to watch this show. It was the highlight of my trip. AAAAAMAAAAAAZZZZIIIIINNGGG!

The Grand Palace is a majestic structure consisting of several buildings, guarded by a rectangular wall with mostly golden paint and statues. What used to be the official residence of the Kings of Siam, is now a popular tourist attraction, with several royal ceremonies held here annually.
The entrance fee is 350Baht per person, including the entrance to The Pavilion of Regalia, Royal Decorations and Coins and Vivanmek Mansion. 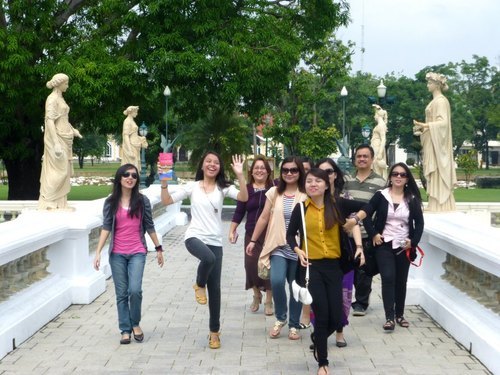 On our way to the Palace Although Thais are very tolerant especially to foreign tourists, it is best to show respect in dress code when visiting temples

This dress code is strictly enforced at the Palace. But do not despair, being tourist friendly, you can rent long loose pants for guys, long wraps and cover ups for girls like sarongs. But I’m afraid these sarongs are for free! My first taste of HD ice cream was when we had our vacation in Hongkong. I fell in love at first taste. Even though it was expensive, but its still worth the taste. We bought HD ice cream since it’s cheaper here. There’s just nothing like it. It’s flavor-packed in every scoop, and the quality of it is just always the best. so rich, creamy, sweet, and the flavors they have are always so perfect!! All i need is a kids’ scoop, and I am satisfied. 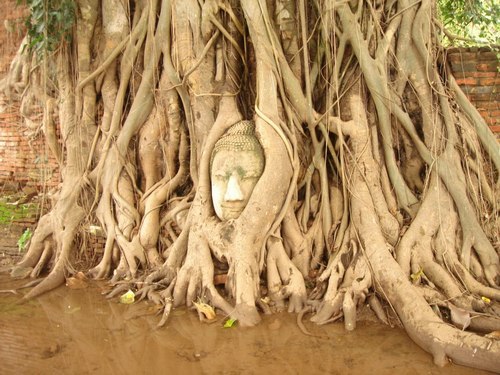 The head of the sandstone Buddha in roots of Bodhi tree 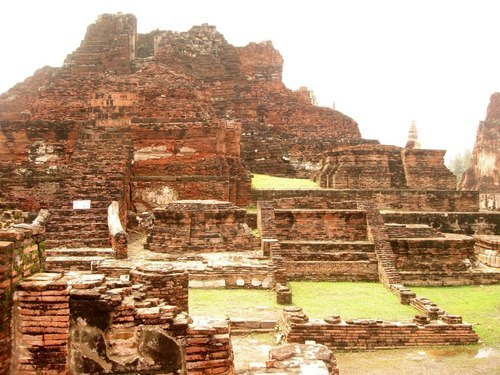 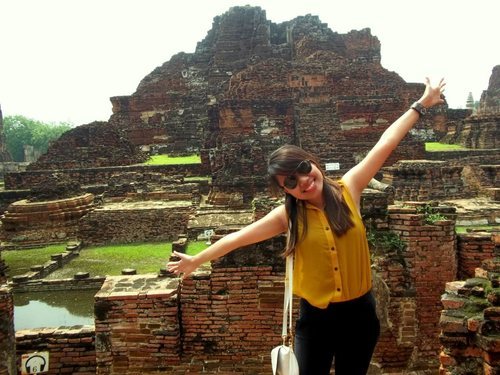 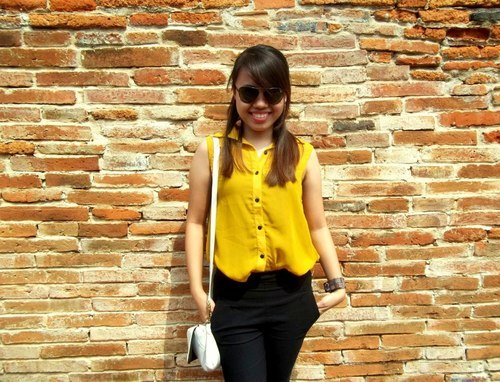 Our city tour was more on temple hopping and seeing different figures of buddhas. It was a good experience to witness the culture of Bangkok but how I wish they knew our Heavenly Father from above  as well.

As much as I wanted to mention each names of the temples we visited below, I really can’t remember the names anymore, not to mention their temples or purely their language is really hard. The Buddhist temples usually have the interior temple bells which hung from a stylized framework of wood and stand on the floor so it can be moved.

They said that by ringing the bell, it could remove or protect a person from spell or evil spirit. And according to traditional belief, the sound of bell ringing can purify the holy place so the bells become one of the sacred objects for Buddhist temples.

View all posts by hellodewww

One thought on “Bangkok, Thailand Part 1”

A New Paradigm of time

Balancing life, medicine, and faith Spare time is precious to me. The time commitment of studying medicine has taught me to value any spare time I get to myself. As I look to the future- I can only see things becoming busier with increasing demands, responsibilities and commitments as a medical doctor. I am sure […]

A Man that serves

Never ever underestimate the ability to pay close attention to details of a man who serves. He might not always be about the grandeur things, but he is always present for those little acts of love that build up the foundation of your relationship. If you’re sad, he easily figures it out and checks on […]

As you move through the stages of your life, you will invariably learn that things aren’t always as they are cracked up to be. And as amazing as life can be, there are also harsh truths that you tend not to acknowledge until they are staring you in the face. Just like life after the Physician […]

“IF I DON’T GET THE THING THAT I GIVE, THEN MAYBE OTHERS DESERVE IT MORE

What’s happening: “IF I DON’T GET THE THING THAT I GIVE, THEN MAYBE OTHERS DESERVE IT MORE” This is the kind of love that this generation is having. People are at haste and want to get things over with. But continue to believe in waiting and letting things take its course naturally. Time is everything. […]

Humility is so tricky that when you start wearing it, you lose its power. But when you start living it, people will be naturally drawn to you. Humility is the act of making yourself empty of pride, arrogance, and all sorts of selfishness. It is the constant lifestyle of resting in God’s grace that says, […]

Our PLE journey was very different from what most doctors encountered. Ours was in a time of crisis that brought another whole new level of ordeal. They say you have all the time to focus and prepare for the examination but maintaining our mental health state was another thing to take into account knowing that […]

I am happy to spend my birthday with the people dear to me in this very beautiful place. It was indeed very cold but the warmth of love from my family and friends made the temperature bearable. Yes, it’s my birthday and I am blessed that the good Lord added one more year to my […]

You survived senior clerkship! (4th year) Congratulations! You’ve graduated and earned your Diploma. You now bear the title of a doctor. …and yay, you still have a loooong way to go! The 5th year of Medicine is the Post-Graduate Internship year, as most Philippine Medical schools give their diplomas at the end of the 4th […]